Drafting, Collaborating, & Documenting on the Set of Star Trek 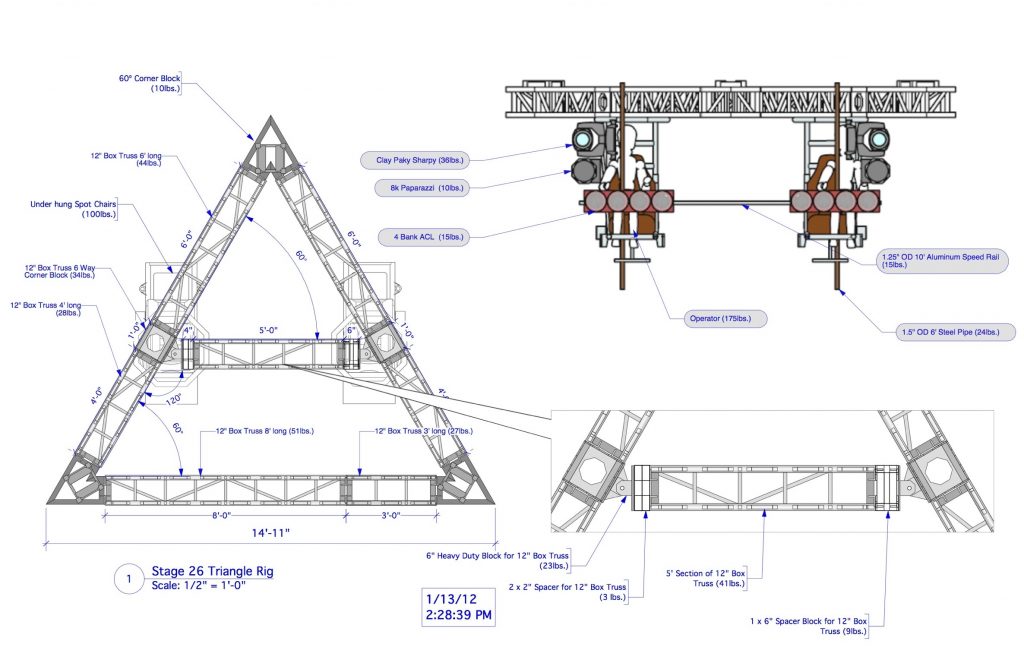 It's summertime, and everyone loves a summer blockbuster! John Amorelli’s design prowess led him to be hired to design stage maps and rigging designs for J.J. Abrams’ 2013 summer blockbuster, Star Trek Into Darkness. Read on to learn how Amorelli used the industry-standard software to help bring this film to life!

To create stage drawings for the film, Amorelli had to start from scratch. “There was nothing existing,” he recalled. So, Amorelli went through the stages on the Sony Studios lot, measured them by hand, and also talked with the art department to get all the necessary measurements he needed to begin his drafting in Vectorworks.' 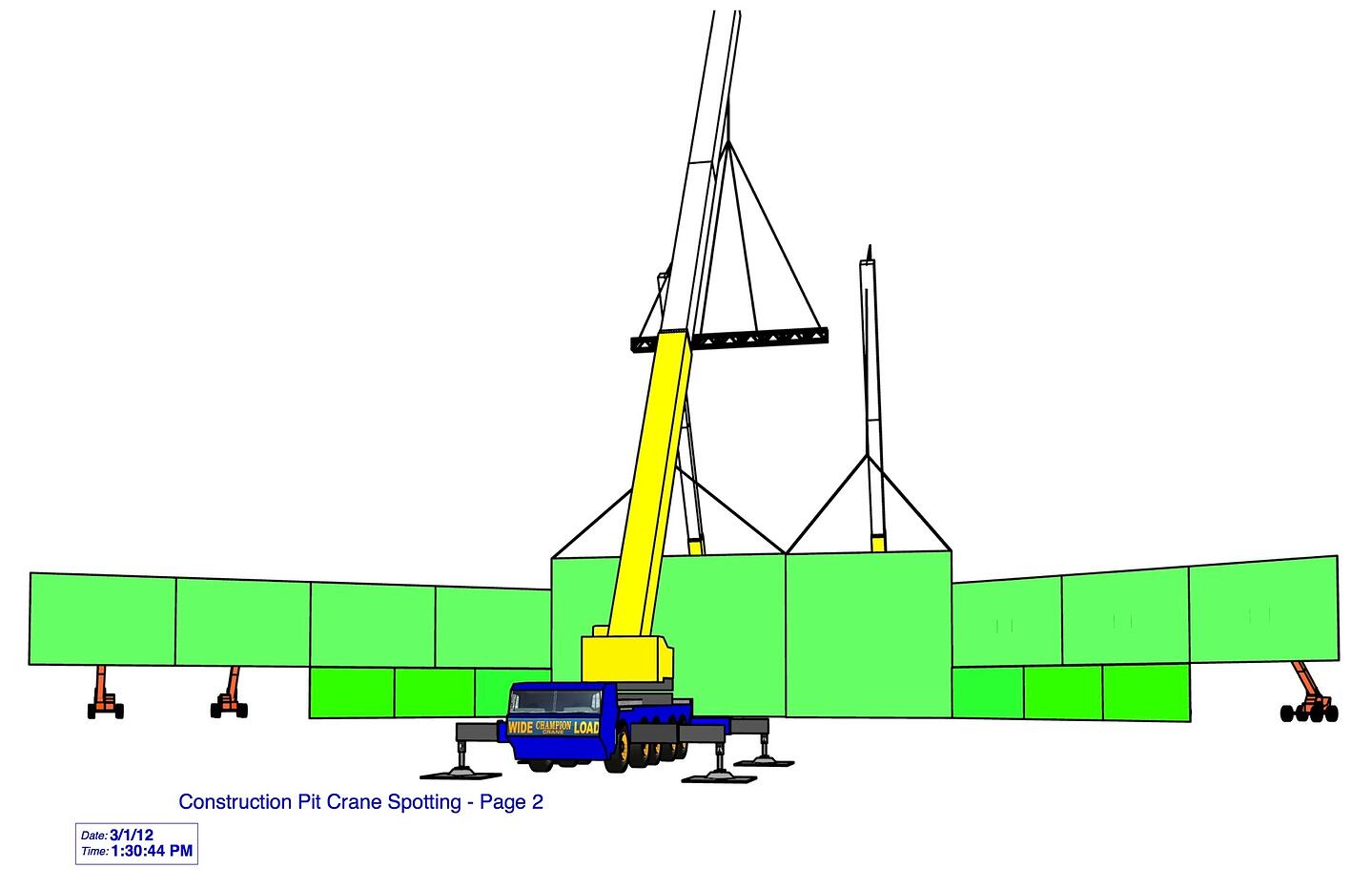 In addition to no prior plans or measurements, Amorelli had to design crane hook-ups for trusses, as some of the film was also shot outside. Amorelli created custom symbols in Vectorworks and even modeled the crane that would be used. “I made every one of those cranes a custom, moving light, like a spotlight with focus points on each arm,” he said. “I was quite proud of being able to make this all in Vectorworks.”

With Star Trek having one of the biggest fandoms in the world, it’s no surprise that Into Darkness had a massive crew with a ton of collaborators. All of Amorelli’s designs had to be shared with and approved by consultants in other departments. An example of this came when Amorelli was trying to hang heavy light structures. “There were hundreds of six-light par bars that needed to hang above a certain stage,” he said. “I spoke with the engineering department at Sony Studios to see if we could hang that much weight.” READ | “Brace Yourself! 5 Tips for Using Braceworks in Vectorworks Spotlight” Sony, however, told Amorelli that his original plan wouldn’t work on the sound stage. “So, I redrew the whole ground support that was just braced by the beams above it with wire rope to keep it steady from being able to go backward and forwards,” he said. Another iterative drafting process that Vectorworks aided in was the creation of a triangle-shaped truss. 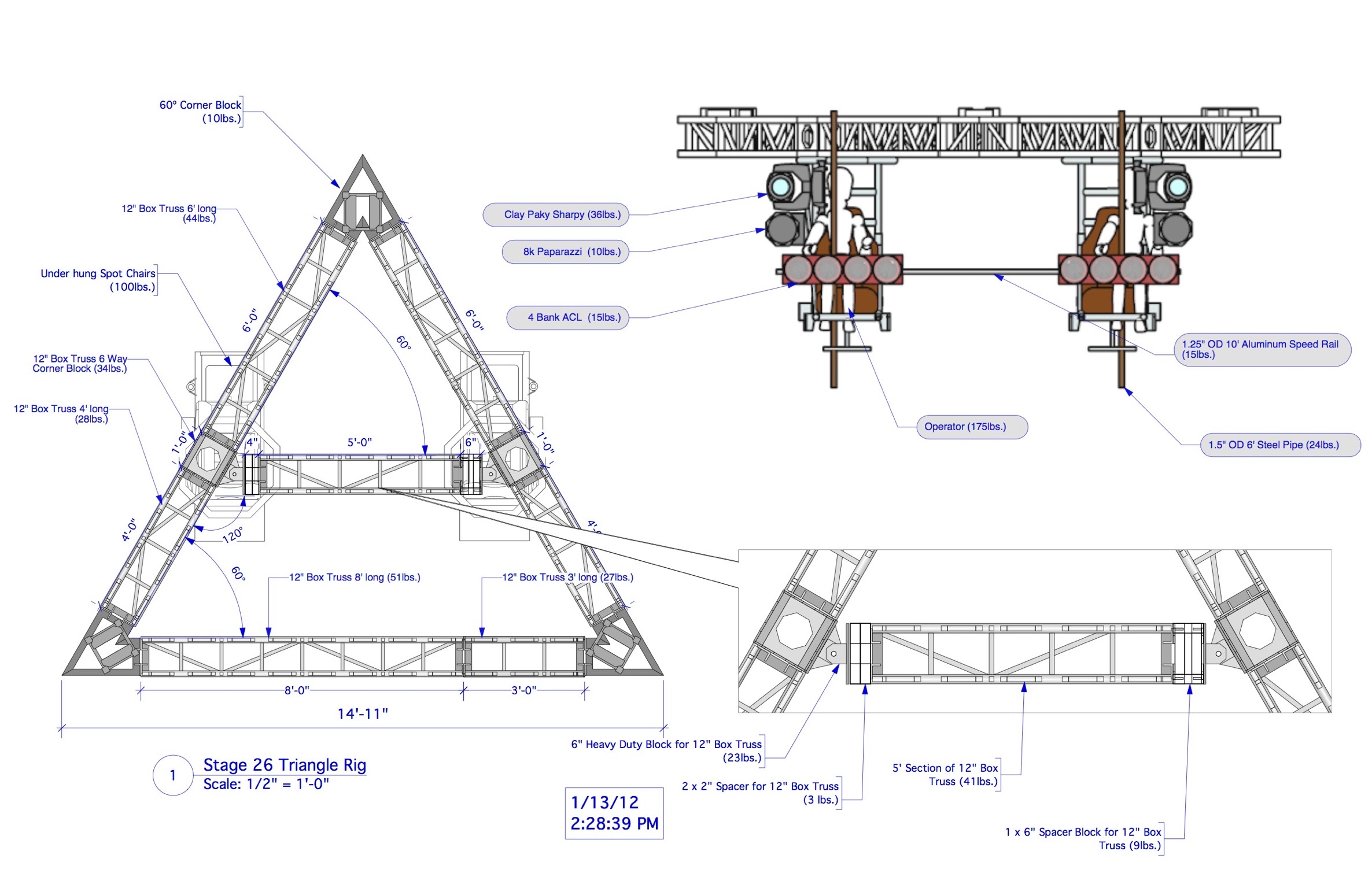 “The version we used was probably the fifth or sixth iteration of the design,” he said. “It started out as just two straight pieces of truss with three underhung spot chairs.” But after discussing with consultants who’d automate the flying of the structure, Amorelli was instructed to turn the system into a triangle that better maximized space. With Vectorworks’ ease of use, Amorelli was able to make similar edits and adjustments throughout the entire pre-production process, all while remaining on track with the film’s strict deadlines.

Just as a timely redrafting process helps with collaboration, so too does precise documentation. In fact, when working on the previously mentioned triangular rig, Amorelli had to provide exact counts, measurements, and budgets to heads of other departments. As with his drafting and collaborative processes, Amorelli was able to do this in Vectorworks. Amorelli recalled, “I had a library of the company’s equipment. I was able to use those exact models in Vectorworks and have exact count and measurements of what’s going to be where in the design.” When the time finally came to share documentation of the final design to consultants, Amorelli’s weight calculations were within one percent! READ | “Vectorworks Tutorial Series | Documentation” With precise and well-documented designs, crew members were able to efficiently — and more importantly, safely — bring Amorelli’s Star Trek Into Darkness ideas to life. “I can’t imagine how it all would’ve worked and been functional without a program like Vectorworks!”

Although a seasoned designer with Vectorworks Spotlight on projects like Star Trek Into Darkness, Cowboys & Aliens, and even the upcoming Avatar film, Amorelli — like any good designer — admits there’s still more he wants to learn. If you’re also looking to grow in your knowledge of Vectorworks and entertainment design, check out Vectorworks University. You can find tech tips and work your way towards certifications that prove your skills. DO MORE WITH VECTORWORKS