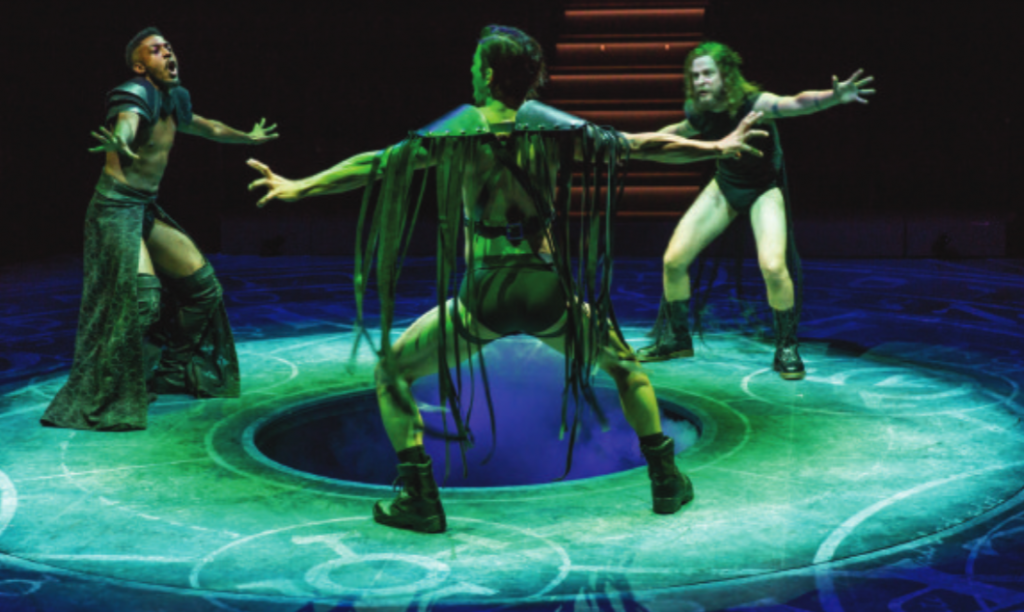 Something wicked this way comes? Not with Vision software, as it proved advantageous for Alex Jainchill, a freelance lighting designer based in Brooklyn, NY, when he was tasked to light the Denver Center for the Performing Arts’ contemporary production of Macbeth. 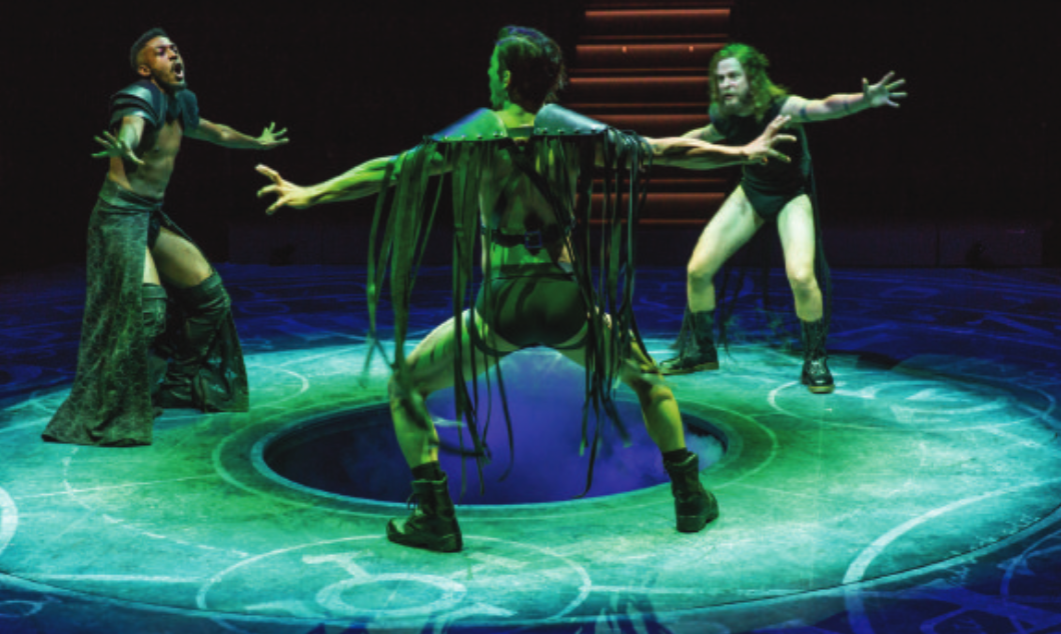 Actors on set of The Macbeth production stage. Image courtesy of the Denver Center for the Performing Arts.

Jainchill was introduced to Vectorworks while studying at Rice University, but at that point he was still doing most of his drafting by hand. After graduation, he took a job as a production electrician with Goodspeed Musicals in Connecticut, where he used Vectorworks. Around the same time, he traveled to our Columbia, MD office to take basic and intermediate training classes. “While few others in the class were specifically lighting designers, I learned a lot about how to navigate the software,” says Jainchill.

He spent a few years working on productions in Connecticut, Houston, and New York and then met Director Robert O’Hara, who asked him to light his reimagining of Macbeth.

Many of the scenes in this production involve the actors in dance sequences set to electronic dance music. There were many different light cues for these scenes, making Vision essential because Jainchill could easily keep track of each light cue and pair it with the fast-paced music. “When the soundtrack is playing, the light board is listening and I can tag light cues in,” he says. “It’s like a rabbit hole because you can put a light cue every second if you want.” 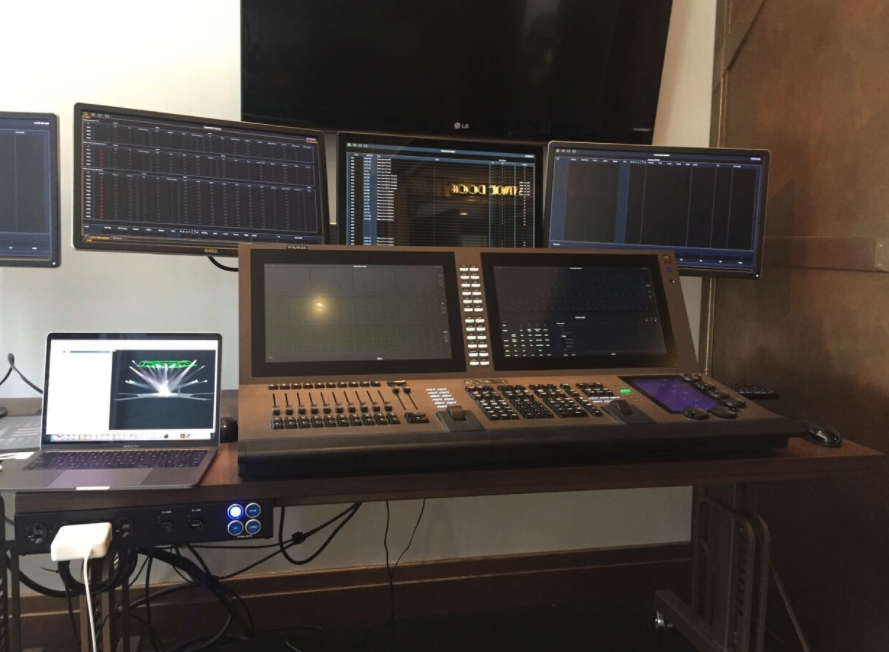 The light board used for the Macbeth production.

For this production, Jainchill previsualized the show using Vision. With our software, he was able to show the scenic designer and director what the lighting design would look like and where the lights would come from.

When working from home, Jainchill would hook his laptop up to the TV to view the design on a larger screen, so he could work on the file and visualize the show before the lights were hung in the theater, which proved to be a huge time saver. 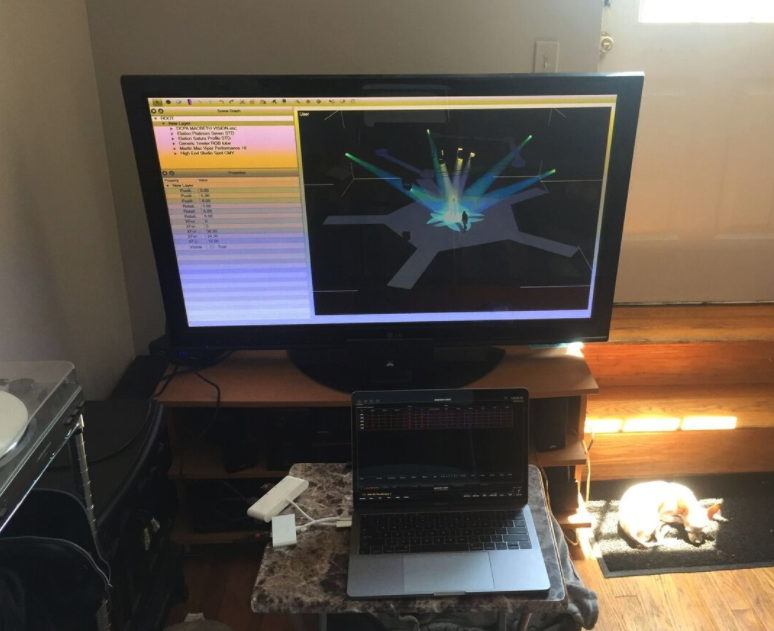 Jainchill spent a lot of time setting up the color palettes and presets for the production and then brought all of this information with him to Denver for the first rehearsal. With assistance from the programmer, Jainchill hooked up his computer to the console. They then spent several hours chatting about the equipment and the expected workflow for the show. “It’s important to sit down with the lighting assistant and programmer to figure out how they like to run things,” Jainchill explains. “And with Vectorworks, it’s like taking what’s already a shorthand and making it even shorter.”

This production of Macbeth was performed in the round, a configuration in which the audience surrounds the stage. Jainchill says the most beneficial aspect to working in Vision is that it simplifies the process to check lighting angles. “Just today I was talking to a fellow designer about the challenges of making a section for a show that is in the round,” he says. “Once you've done the work to make a 3D drafting and exported it to Vision, it becomes much easier to really check the way your lights relate to architecture. I’ve also found Vision to be very useful for console setup and organization, as well as building and editing effects.” 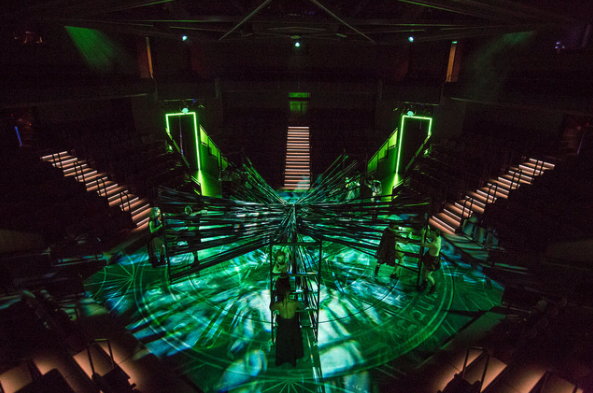 The Macbeth production stage. Image courtesy of the Denver Center for the Performing Arts.

“Vectorworks is a fundamental part of my workflow on any project I take,” says Jainchill. “And as I improve my drafting skills, I find that I am able to complete drawings for projects quicker and I can take on a greater number of projects.”

You can learn more about Alex and his experience on his website.

On February 20, Jainchill will be hosting a free, one-hour webinar on how he used Vision previz software to design and cue the Macbeth production. Register below to save your spot: